Alaska Brown Bear hunting is the ultimate in North American adventure! Alaska Brown bear guide George Siavelis now specializes exclusively, on big brown bear hunting along Alaska’s Gulf Coast region. The streams in these areas receive heavy salmon runs, including all five pacific salmon species. The bears in these areas are as large as bears get anywhere in the world. Watching the largest carnivores on earth, aggressively hunting and catching salmon, often just 30 or 40 yards away, will get your blood pumping, and will not be forgotten easily. Hunting the great bears along these streams is very exciting in deed. A giant coastal brown bear is the ultimate trophy. 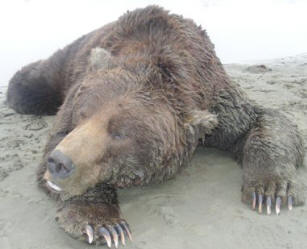